The gut microbiota is gradually revealing its secrets. Its ecosystem contains about 1000 different species of microorganisms, which encode more genes than the human host and recent studies show its impact on several health issues… Review of the literature suggests that diet can modify the intestinal microbiome, which in turn has a profound impact on overall health. This impact can be either beneficial or detrimental, depending on the relative identity and abundance of constituent bacterial populations.

Yogurt live bacteria and their impact on gut health

Yogurt consumption has been associated with:

The mechanisms may remain to be studied.

Yogurt is characterized by its live microorganisms (Streptococcus thermophilus and Lactobacillus delbrueckii subsp. Bulgaricus), as well as strains of Bifidobacterium and Lactobacillus added specifically for their probiotic properties. Both culture organisms may benefit from the gut environment and, consequently, have an impact on health. These “probiotic” properties are of great interest for research. A recent study(1) report that regular consumption of yogurt appeared to increase the numbers of Lactobacilli. The microbial diversity also appears to increase slightly with yogurt consumption in some subjects. 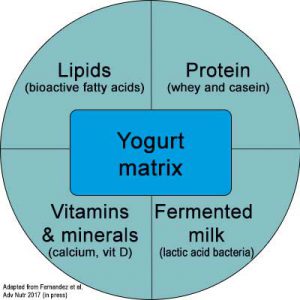 The dairy matrix also matters! Still, dairy foods have long been the main delivery vehicle, and most probiotics do just fine in this matrix.

Beer and wine, for example, undergo steps that remove the organisms. Other fermented foods are heat-treated and the organisms are inactivated. Bread is baked and sauerkraut is often canned. So while these foods may be nutritious, they do not have probiotic activity, but may impact gut microbiota as well, as fermented foods.

What could explain the health benefits of yogurt, reported by numerous epidemiological studies? Yogurt is a nutrient-dense food that contributes to the intake of protein, calcium, bioactive compounds and several micronutrients, which could help to explain some of its health benefits.

Dietary proteins can act as key regulators of immunometabolic factors and gut microbiota. Furthermore, during the fermentation process of milk with yogurt cultures, dairy proteins are cleaved, generating in smaller molecules that can have some biological effects. These bio-active peptides could explain the greater beneficial effect of yogurt on metabolic health compared with non-fermented dairy products, such as milk. For example, the fermentation of yogurt may lead to an increased production of bioactive peptides with physiologic effects such as increased insulin sensitivity and glucose tolerance. Several peptides or peptide fractions have also been investigated for their bioactive properties such as anti-hypertensive, anti-thrombotic, satiety, opioid, immuno-modulatory, osteogenic, and antioxidant activities. Fermented dairy peptides and especially yogurt-type peptides generally exerted greater anti-inflammatory effects than other dairy products. These immunometabolic effects are associated with major taxonomic changes in the gut microbiota. Whether specific bacterial species are modulated by peptides released from fermentation from dairy products remains to be determined. These newly proposed mechanisms require therefore more research before being validated as a key factor in the protection against CMD, like type 2 diabetes or obesity. 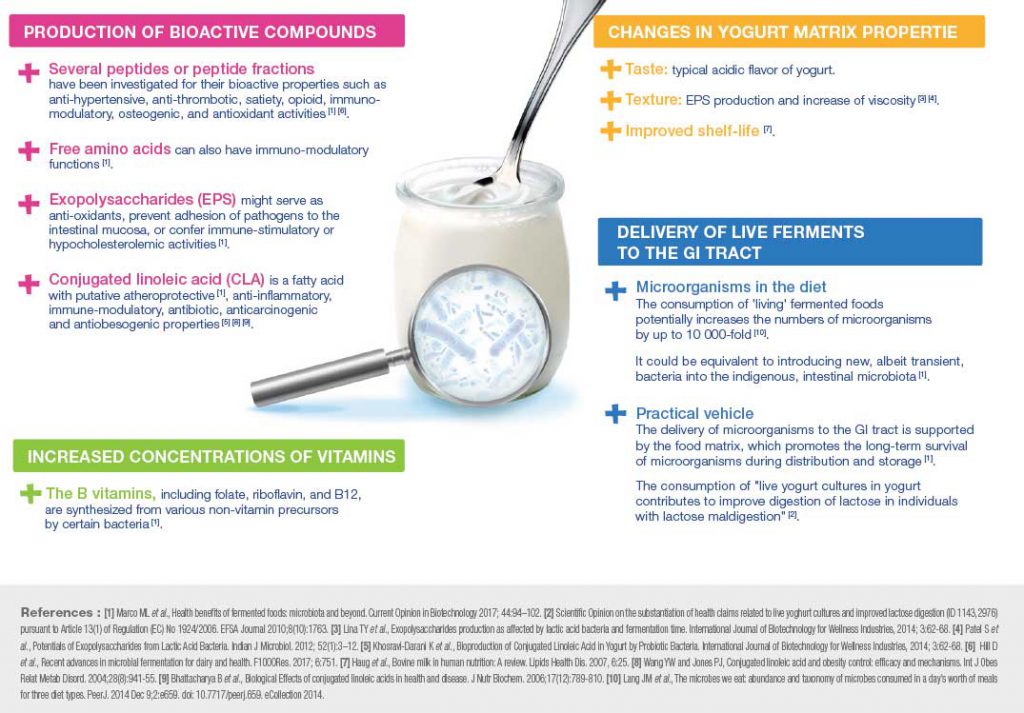 Yogurt is the best source of key bacteria

Yogurt and fermented milks are part of the most significant sources of viable bacteria (1 cup of yogurt = 10 8-10 bacteria). Despite the impact of fermented foods and beverages on the gut microbiota, their many health benefits or recommended consumption have not been widely translated to global inclusion in world food guidelines. In Europe, only one health claim (EFSA, 2010) has been approved for beneficial microbes: “live yogurt cultures improve lactose digestion”. The microbes contained in yogurt may also affect the function of the resident gut microbiota, even if they do not affect its composition, as it has been suggested by numerous studies. Indeed, the health benefits associated with the consumption of yogurt are more and more studied, and the importance of yogurt cultures Lactobacillus and Streptococcus in health promotion, by strengthening the intestinal mucosal barrier for example, have been recognized.

A larger review of the science on the beneficial effects of the yogurt and its fermented dairy matrix will be made in June 2018, during the next YINI global summit: “Yogurt, more than the sum of its parts”