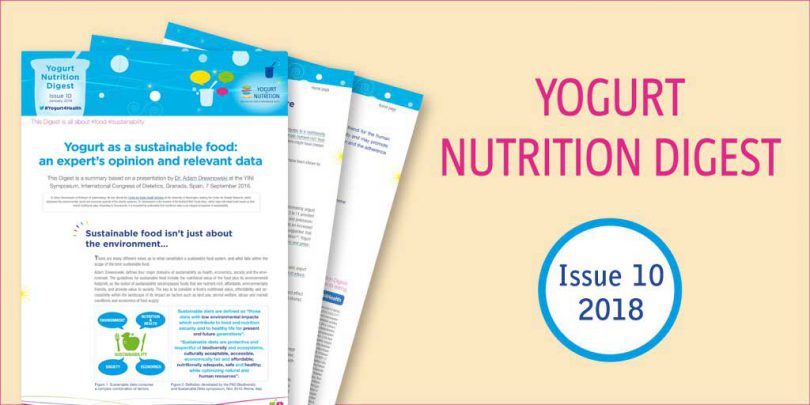 As a nutrient-dense food, what is the place of yogurt in a sustainable diet? This Digest “yogurt as a sustainable food: an expert’s opinion” is a summary based on a presentation by Dr. Adam Drewnowski at the YINI Symposium, International Congress of Dietetics, Granada, Spain, 7 September 2016.

Dr. Adam Drewnowski is Professor of Epidemiology. He also directs the Center for Public Health Nutrition at the University of Washington, including the Center for Obesity Research, which addresses the environmental, social and economic aspects of the obesity epidemic. Dr. Drewnowski is the inventor of the Nutrient Rich Foods Index, which rates individual foods based on their overall nutritional value. According to Drewnowski, it is important to understand that nutritional value is an integral component of sustainability.

There are many different views as to what constitutes a sustainable food system, and what falls within the scope of the term sustainable food.
Adam Drewnowski defines the four major domains of sustainability as health, economics, society and the environment. The guidelines for sustainable food include the nutritional value of the food plus its environmental footprint, so the notion of sustainability encompasses foods that are nutrient-rich, affordable, environmentally friendly, and provide value to society. The key is to consider a food’s nutritional value, affordability and accessibility within the landscape of its impact on factors such as land use, animal welfare, labour and market conditions and economics of food supply.

According to Adam Drewnowski, nutrition and health are at the core of dietary sustainability alongside impact on the environment. Further, climate change will affect the choice of foods available – and what we eat also impacts the environment. Within this, Drewnowski refers to diets that help to create more “social value”, i.e., the value of a food in society. The notion of social value incorporates more well-being and benefit for society at large. Sustainable food systems need to balance how a food impacts the environment and the need to take care of the planet on the long term, as well as the health of people.

Nutrient-rich foods tend to be more expensive, whereas foods that provide “empty calories” are usually cheaper.
Nutrient-rich foods typically have a higher environmental impact and are consequently costlier in terms of environmental footprint.
Meat and dairy foods that have a high nutrient density also have higher greenhouse gas emissions (GHGEs). Yet, sugar and some grains that have low GHGEs, have fewer nutrients. The key is to identify those foods which are high in nutrient density, whilst also being sustainable and affordable.

From Turkey to “Casino”

An adapted nutrient profiling algorithm was created for Drewnowski’s study on snacks eaten by Turkish children, and a list of local foods based on their
nutrient score was created  to separate snacks that are energy-dense from those that are nutrient-rich.
Based on these calculations, foods such as yogurt, fruit and nuts are recommended as a daily snack food for school children in Turkey.
Greenhouse gas emissions can be assigned to foods. It is possible to look at a more complete picture of foods by examining their energy density, nutrient composition, and carbon cost.
In 2008, the French retailer Casino, launched a food labelling initiative based on the carbon footprint of a range of its own-brand products. The Casino Project which involved a large number of French supermarkets, used GHGE and nutrient data to create carbon cost data. This allowed the researchers to assign the carbon cost in terms of GHGE per 100 kilocalories to a particular range of foods. Yogurt can be favorably compared with other healthy foods in terms of GHGE. Its GHGE value is lower than what is predicted by its nutrient density. Paradoxically, it is sweets and sugars that have the lowest environmental impact but they also offer the least
nutritional value.

Can eating yogurt be good for our health and the health of our planet?

Dairy products, including yogurt, provide significantly more nutrients than calories relative to the body’s needs and can be qualified as a nutrient-rich and a low energy-dense food. In nutrient profiling models, some of the highest nutrient density scores are awarded to unsweetened and low-saturated fat yogurts.

Further, protein-rich yogurt offers high quality proteins and can make a good contribution to a lower meat diet.
Milk and yogurt are higher in nutrient density than sweetened beverages, sugar and sweets; but they are also higher in carbon cost. As discussed above, foods with high energy density typically have a low carbon cost, with some exceptions such as potatoes, and fortified breakfast cereals.
One of today’s challenges is how we provide populations with enough sustainable protein. Fish, eggs and poultry are rich sources of protein, but they also have a higher carbon cost than vegetarian protein foods.

Yogurt is high in protein and has a lower carbon cost than many other options.
Yogurt and dairy products are well positioned in terms of overall nutrient value, such as calcium and high quality proteins, and overall environmental impact.
We’ve established that sustainable foods need to be nutrient-rich and planet-friendly, but what about affordability? The review by Darmon and Drewnowski highlighted the importance of affordability in developing sustainable diets.

Specifically, food patterns that are nutrient-rich, affordable, and culturally acceptable should be promoted to help alleviate socioeconomic disparities in diet quality.
Less expensive sources of calories typically include sugar, cereals, pasta, nuts, beans and milk; the latter provide good nutrition at a low cost. Using NHANES data, yogurt has a medium energy cost, and fresh salads, fruits and seafood a higher cost. Eating a healthy balanced diet appears to be in conflict with affordability, since sweets and fatty foods tend to cost less and offer lower nutrition value, while some nutrient-dense foods can be associated with higher costs. New metrics of
affordable nutrition have also confirmed that yogurts and some other dairy products such as milk are the lowest cost sources of dietary calcium and a very affordable source of high quality protein.

Yogurt is a sustainable food, and it is also an integral part of a sustainable diet. Macdiarmid et al used diet modelling to determine whether reductions in GHGEs can be achieved while meeting dietary requirements for health. Proposed diets that incorporated dairy products (including yogurt) and meat were able to meet dietary needs whilst leading to a 36% reduction in GHGEs.

Yogurt is an integral part of a varied diet. Yogurt consumers appear to have more adequate nutrient intakes, and they tend to make other healthier food choices. Yogurt consumption is also linked to other healthy lifestyle habits. It also has a low carbon footprint, whilst supplying quality proteins and minerals such as calcium. It can thus be an affordable, environmentally friendly part of nutrient-rich sustainable diets.