Each food intake leads to a rise of carbohydrate (glucose) in the blood, which will be used as energy by the body. This rise of glucose normally triggers the release of insulin. Thanks to insulin, the body cells let glucose come in, and transform it into energy. The level of sugar in blood  the glycaemia, is partly regulated by insulin. Once glycaemia goes back to its target value, the blood levels of insulin drop off. Glycaemia must be precisely regulated to remain in its narrow range, so that the body can function optimally.

Diabetes is characterized by an abnormally high glycaemia. When glycaemia chronically outreaches a defined threshold, there is an increased risk of developing adverse long-term effects. These damages and dysfunctions are often related to eyes, nerves, heart, kidney and blood vessels and they are the common symptoms of diabetes.

In the world, about 415 million people have diabetes. By 2040, this number has been estimated to reach 642 million people, which makes it a global health concern.

What are the different types of diabetes?

There are three different types of diabetes:

How is diabetes diagnosed?

Diabetes and pre-diabetes are usually diagnosed using both the “fasting plasma blood glucose” (FP BG), and the glucose value measured 2 hours after ingestion (2-Hr OGTT). The figure below summarizes the differences between no diabetes, prediabetes and diabetes. When the fasting plasma glucose level is higher than a level that would minimise health risks, it is said that the patient has high blood glucose.

How to distinguish prediabetes and diabetes from no diabetes

What are the treatments for diabetes?

Apart from drugs and insulin injections, given when necessary, lifestyle matters a lot. The World Health Organization (WHO) states that moving to a better lifestyle will both reduce the occurrence of obesity and T2D, and reduce complications for all diabetics. Therefore, the WHO advises people to combine healthy diets, physical activity, and medication if needed, in order to monitor blood glucose level.

For Type 2 diabete (T2D), it is advised to keep an eye on your diet in order to keep from excessive postprandial glycaemic responses (1). And this may be harder than it seems. Indeed, focusing on calories and nutrients is not enough to watch over your diet.

Let’s take the example of proteins. Protein content can lower glycaemic response by increasing insulin secretion. But this effect depends on the source of protein, and insulin is not the only factor involved in glycaemic management.

What is the glycaemic index?

Each food can be characterized by a value called Glycaemic Index (GI). It refers to how fast glycaemia rises after eating a particular food. GI fluctuates between 0 and 100, 100 corresponding to glucose. Food with higher GI will increase blood sugar levels the most. The GI values are divided in three classes:

How to select foods regarding the GI?

Because high-GI foods induce a quick spike in blood sugar levels, it is advised, especially for diabetics, not to eat too much food with high GI. Actually, picking low GI meals help people to reduce the GI of their diet.

We may also mention that plain and sweetened yogurts have lower GI than what one could expect with its carbohydrate content. Several explanations have been suggested. The lactic acid of the yogurt may slow down gastric emptying and therefore reduce glycaemic response. The amounts of fat, proteins and micronutrients, known to reduce glycaemic response, may also be involved. That is why switching from product with added sugars to yogurt is a healthy choice.

GI is commonly used but there is another value to describe sugar intake. The glycaemic load or GL is calculated with the GI and the amount of carbohydrate of the food consumed.

Can yogurt prevent from T2D risks?

Available data indicate there may be a beneficial association between yogurt consumption and Type 2 diabetes.

A large scale study has also showed that yogurt could help reducing the prevalence of Type 2 diabetes: when the frequency of yogurt consumption increases, the risk of getting T2D declines in a linear relationship (3). Also, as shown in figure 2, yogurt is linked to a healthier insulin profile in children and teenagers. 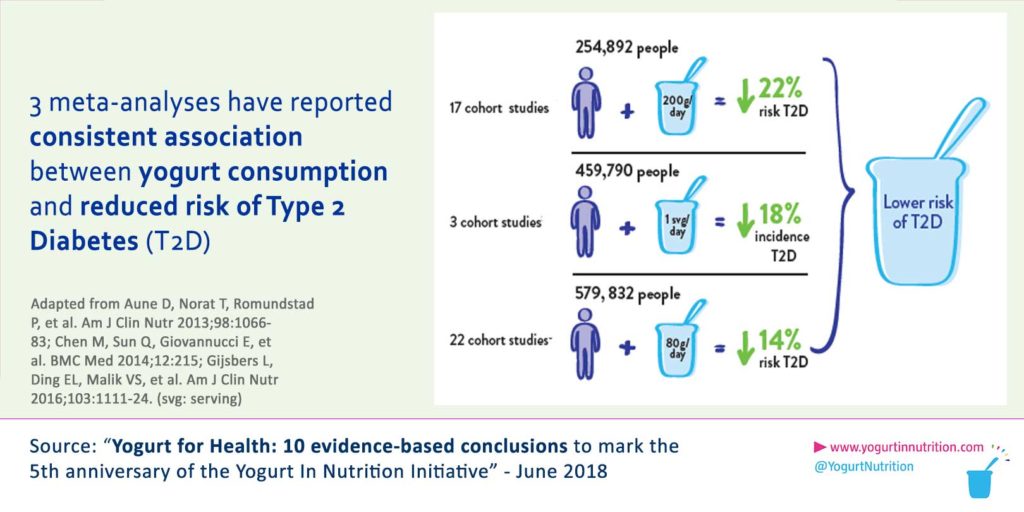 Several biological mechanisms may explain the benefits of yogurt (2, 3, 4, 7) :