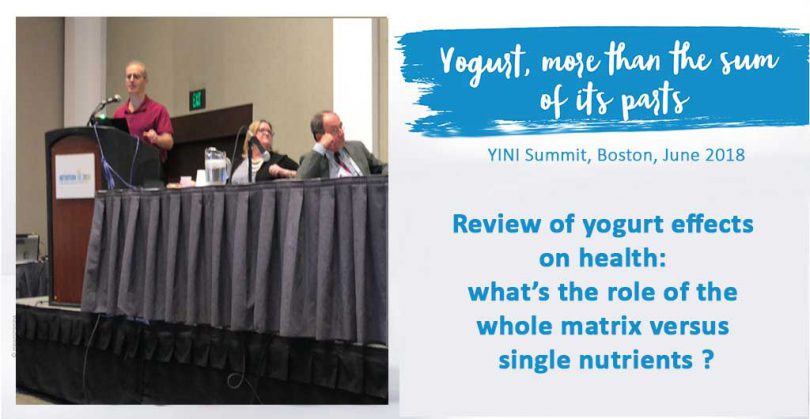 If you missed the insightful YINI Summit at ASN 2018 Boston, you can catch up on Dariush Mozaffarian’s expert presentation here, where he challenges current dietary guidelines and shares evidence on the protective effect of full-fat dairy foods (and if you want more highlights, check out the wrap up post).

There is a plethora of dietary information available at our fingertips; scientific journals are accompanied by apps, diet books and marketing strategies by commercial companies, much of which can lead to confusion amongst the public.

Conventional wisdom supports the “calories in /calories out” theory 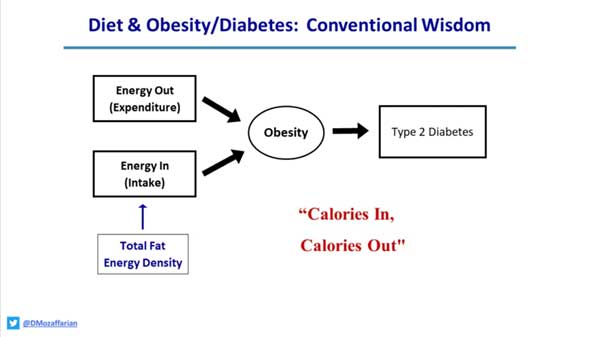 A survey of the dietary recommendations across the globe shows an overwhelming agreement in advice to choose low-fat dairy foods, to reduce fat and especially saturated fat intake. Calories and fat dominate current policy. We’ve been focussing on single nutrients since 1753, when James Lind tested whether citrus fruits prevent scurvy, and in 1932 the revolutionary link was made between vitamin C and scurvy. In a nutshell,one nutrient having an effect on one disease.

Over the years, dietary guidelines have focussed on the amount of nutrients needed to prevent deficiency diseases, and modern recommendations use isolated nutrient targets which are translated into food recommendations.

The average adult gains is about 1lb/0.45kg each year. This isn’t just about calories in / calories out, as there is growing evidence to support the fact that all calories are not created equal. Many factors contribute to this – and the gut microbiome has a significant role to play.

The quality of your diet affects your gut microbiome and Mozaffarian quoted randomised trials that show reductions in weight and BMI with consumption of probiotics. As well as weight loss, dairy foods have been shown to reduce risks of CVD and T2D.

…and the importance of considering food type

Interestingly, the relationship of dairy to CVD and T2D does not consistently differ by fat content, but appears to be more specific to food type, as in cheese, yogurt, milk or butter.

These findings suggest that health effects of dairy may depend on multiple complex characteristics, such as probiotics in yogurt, and fermentation of cheese. 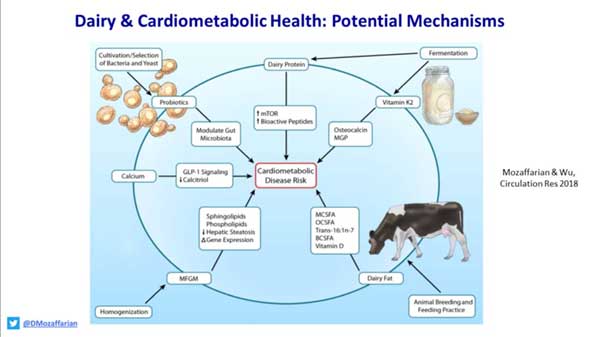 Focus on the Food instead of single nutrients

Mozaffarian argues that dietary guidelines tend to focus on nutrients, which can be misleading; typically, low-fat, fat-free and low-saturated fat foods are considered to be healthier. He conveyed that nutrition is influenced by far more than individual choice, yet policy makers continue to advise the consumer to choose low-calorie, low-saturated fat, and low-sugar foods.

The evidence does not support these recommendations, particularly when it comes to full-fat dairy foods: in short-term randomized trials, dairy foods added to energy-restricted diets increase lean mass and reduce body fat, while no significant body compositional effects are seen when adding dairy to ad libitum diets.  This may partly relate to caloric compensation: when people consume more low-fat dairy, they compensate in the long-term by increasing their consumption of carbohydrates.

Further, greater dairy fat intake is associated with a lower risk of T2D and coronary heart diseases (CHD). It is yet unclear whether such findings relate to health benefits of specific dairy fatty acids, or other factors in high-fat dairy foods. What we do know is that dairy products represent a diverse class of foods, each having their own effect on health, and the complex mechanistic pathways that offer benefit may include influences of fermentation and probiotics.

The evidence on beneficial effects of full-fat dairy does not support the guidelines that emphasize low-fat dairy, and Mozaffarian goes as far as to say that the guidelines are based on “theorized influences on obesity and CHD, rather than empirical evidence”. Dairy foods should not be considered as a single category, and should be evaluated on their own merit

Pending further investigation, the current science supports we eat more yogurt; whether we choose low-fat or full-fat should be down to personal preference.