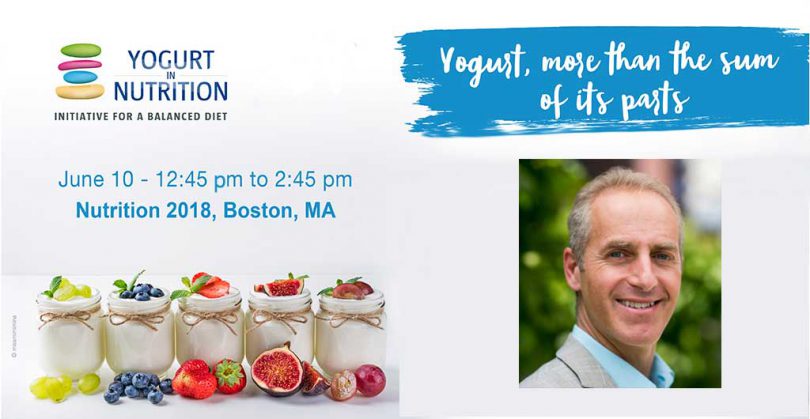 The global health effects of yogurt are beyond the single effects of each nutrients and live bacteria, as indeed, “yogurt is more than the sum of its parts”. The updated scientific data about food matrix benefits of yogurt will be the topic of the 6th YINI Summit in the context of the Nutrition 2018 Congress, on June 10, in Boston.

Dr. Dariush Mozaffarian from the Tufts University (USA) will build the global review on yogurt effects on health and the role of global food matrix vs single nutrients.

Review of Yogurt effects on Health: what’s the role of the whole matrix versus single nutrients?

Dairy products represent a diverse class of foods, with complex effects that appear to vary by specific product type, and with emerging complex mechanistic pathways that may include influences of fermentation and probiotics.  “Based on the recent data, how should we build the next nutritional recommendations? What are the recent data on dairy products and cardiovascular health? Are there specific cardiometabolic effects for dairy or fermented foods?” Those are some of the questions addressed by Dr. Dariush Mozaffarian.

Who is Dariush Mozaffarian?

Dr. Dariush Mozaffarian is a Cardiologist, Jean Mayer Professor of Nutrition and Medicine, and Dean of the Friedman School of Nutrition Science and Policy at Tufts University. He received his BS in biological sciences from Stanford, MD from Columbia, MPH from the University of Washington, and PhD in Public Health from Harvard University.

He has authored more than 300 scientific publications on the dietary priorities to reduce cardiovascular disease, diabetes, and obesity in the US and globally; and on evidence-based systems innovations and policies to effectively reduce these burdens.

He has served in numerous advisory roles including the US and Canadian governments ,World Health Organization, and United Nations. His work has been featured in the New York Times, Washington Post, Wall Street Journal, National Public Radio, Time Magazine, and many other outlets. In 2016, Thomson Reuters named him as one of the World’s Most Influential Scientific Minds.