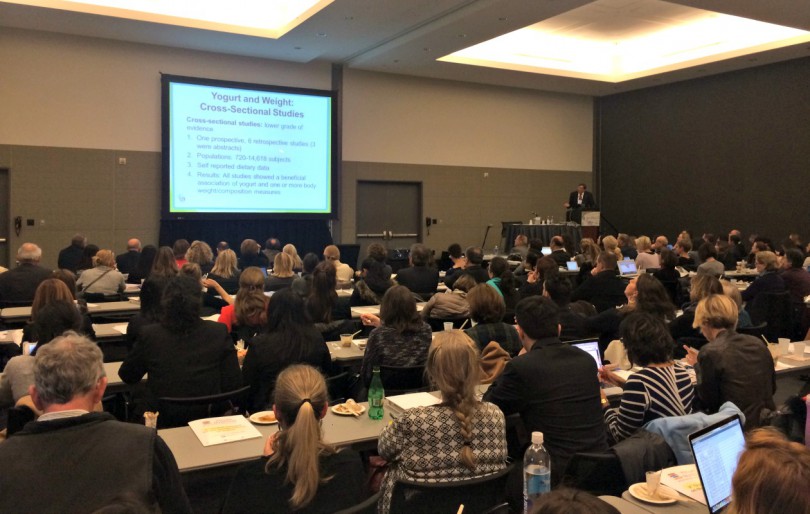 The 3rd Yogurt Summit on the Health Effects of Yogurt brought together three highly respected international experts on weight management and systematic reviews. Here are some highlights of the event that explored the relationship between yogurt consumption and weight.

Obesity is a phenomenon that now affects all populations across the globe, both rich and less well-off. It is even spreading at an unprecedented rate among some of our four-legged friends, namely our pets! As part of the scientific sessions organised at EB 2015 by the American Society of Nutrition*, the Yogurt in Nutrition, Initiative for a Balanced Diet brought together 3 international specialists in this field: Dr Jacqui Eales, researcher in systematic reviews (York Health Economics Consortium, YHEC), Dr Richard Atkinson, director of the Virginia Obesity Research Institute, and Professor Angelo Tremblay from the department of kinesiology at Laval University in Quebec. The objective of the event was to take a scientific look at the potential of yogurt in relation to weight management.

Nutritional experts all agree: the fight against obesity, including its prevention, requires a multidisciplinary approach. As pointed out by Dr Richard Atkinson, the progression of obesity seems to be taking the form of an epidemic that spans all age groups and social classes. This is essentially because its origins are linked to several factors which, on the whole, are cumulative, due to the fact that they are connected to our family history (genetics, mother’s diet during pregnancy), our environment, our lifestyle habits (diet and physical exercise, smoking, lack of sleep) and even to infections and antibiotic treatment at a young age.

Yogurt and weight: how can we prove a relationship?

What role could yogurt play in this complicated patchwork of obesity-related issues? In order to answer this, a careful analysis of all available evidence is vital, using an objective and transparent approach. This work was recently carried out by Dr Jacqui Eales. Hunting down relevant studies is often the first major obstacle: many pertinent studies may not actually be available in published scientific literature. Another challenge is to careful review a large numbers of studies, identifying differences in methodology. In this context, a systematic approach enables the evaluation and summarisation of all evidence available on a particular subject, and is guided by what is known as a “standardized” protocol. This approach also serves as an important tool for establishing guidelines and policies on public health. Dr Eales’ systematic analysis identified, among almost 18,000 scientific studies about yogurt and health, 61 which were about weight management and 22 that met the pre-established quality criteria.

Next, Dr. Richard L. Atkinson, an expert in the causes and management of obesity examined the studies identified in the systematic review of literature conducted by Dr. Eales. He found that the most notable findings came from cross-sectional and cohort studies. Those subjects who regularly ate yogurt tended to have a lower body mass index (BMI) than those who do never consume yogurt. These types of studies enable identification of correlations, i.e. connections between yogurt consumption and weight management, however, they can not establish cause and effect relationships. In view of these first promising results, there is justification for the development of new intervention studies to better understand the mechanisms of action and the plausible cause-and-effect relationships. Dr. Atkinson concluded that yogurt holds great promise, not to cure obesity, but to exert modest, but significant, benefits in losing weight or preventing weight gain and, thus, yogurt consumption has the potential to contribute in improving public health.

A randomised controlled trial performed in the United States by Zemel and colleagues has revealed the most convincing results to date of an association between yogurt intake and weight loss. As part of a low-calorie diet, consumption of yogurt (containing 1100 mg Ca/day) significantly reduced the body weight, body fat and waist circumference of study participants, in comparison with a control group following the same weight loss diet and taking a a calcium supplement (400–500 mg Ca/day). The effect was modest (losing and additional 1-2 kg over the study), but, even a modest reduction in weight could have significant health benefits.

According to Professor Angelo Tremblay, there are potential four mechanisms identified in the literature for explaining weight stability over time in people who regularly consume yogurt. Firstly, consumption of yogurt is associated with other healthy behaviors. People who regularly eat yogurt take part in more physical activity. In addition, they undergo a process known as substitution: yogurt and dairy products replace foods that are less healthy, leading to an indirect beneficial effect on body weight. A recent study from Ortinau and co-workers suggests that a less energy-dense, high-protein afternoon snack like yogurt, compared to chocolate or crackers, could be an effective dietary strategy to improve appetite control and regulate energy intake in healthy women. But yogurt also has direct effects, mainly through the nutrients that it contains: calcium and dairy protein, both of which affect the regulation of appetite and energy metabolism. These actions are controlled by hormones found in the intestines. The texture of yogurt, its structure and, in particular, its protein matrix also affect energy metabolism, independently of calcium or other nutrients that it may contain, such as added fiber or sugar.

Lastly, the living bacteria in yogurt are another factor that may explain the beneficial effects of yogurt consumption on how the body metabolizes nutrients. In this respect, recent data suggests that some probiotic supplements facilitate appetite control and increase weight loss when used as part of a weight-loss program. As for the often criticised addition of sugar to yogurt, Professor Tremblay downplayed its negative effects on the nutrient profile of yogurt; studies show that it added sugar increases yogurt’s palatability, but has no effect on blood sugar levels nor overall energy intake.

What lessons can be drawn from the 3rd Yogurt Summit?

By way of conclusion, Dr Sharon Donovan (USA), co-chair of the Yogurt in the Nutrition Initiative for a Balanced Diet (YINI) Advisory Board , summarised the key messages and pointed to a number of avenues for research on the relationship between yogurt and weight control that will be necessary in the future: