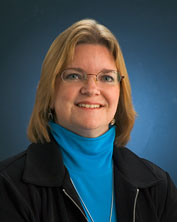 
Sharon Donovan received her B.S. and Ph.D. in Nutrition from the University of California, Davis. After completing a post-doctoral fellowship in Pediatric Endocrinology at Stanford University School of Medicine, she accepted a faculty position at the University of Illinois, Urbana in 1991. She was promoted to Professor in 2001 and, in 2003, was named the first recipient of the Melissa M. Noel Endowed Chair in Nutrition and Health at the University of Illinois. She served as Director of the Division of Nutritional Sciences Interdisciplinary Graduate Program from 1999-2009. She is actively involved in her professional societies and currently serves as the Presidency of the American Society for Nutrition (2011-2012).

Her research focuses on pediatric nutrition, with an emphasis on optimization of neonatal intestinal development. She compares the biological effects of human milk and infant formulas on intestinal function in human infants, neonatal piglets and in various models of intestinal disease.

She has published over 100 peer-reviewed publications, review articles and conference proceedings. She has garnered ~ $20M in research funding as principal investigator or co-Investigator and her research is funded by NIH, USDA and private industry and foundations. She the recipient of several awards in recognition of her research, including the Mead Johnson Award and the Norman A. Kretchmer Award from the American Society for Nutrition.