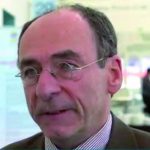 Olivier Goulet is Professor of Pediatrics at the University of Paris-Cité-Sorbonne and Paris Descartes Medical School. He is currently the Chairman of the Department of Pediatric Gastroenterology-Hepatology-Nutrition at the University Hospital Necker-Enfants Malades in Paris. He leads the National Reference Center for Rare Digestive Diseases.

He is involved for more than three decades in the field of infant nutrition and clinical nutrition with a specific interest in intestinal failure management. His interest is also focused on gut immunology and intestinal microbiota. Olivier Goulet published over 315 papers referenced in Pubmed data base. Most are original papers in English and other are reviews.

Member of the French Danone Institute since 2010, he has been coopted as member of the Danone International Institute (DII) in 2013 and then elected as President of the DII, in January 2016.