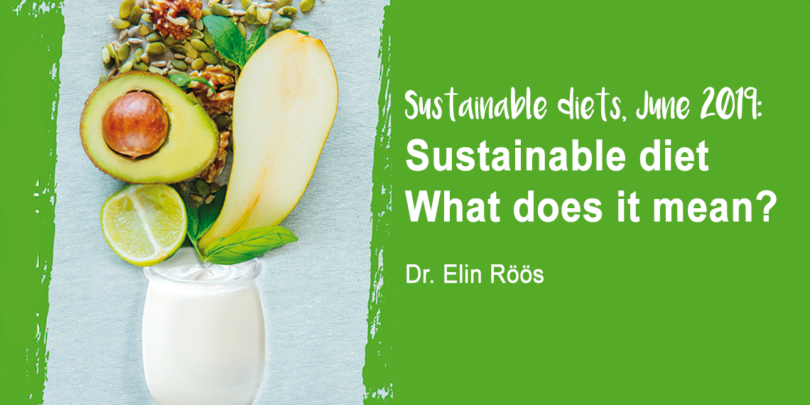 Sustainable Diet – what does it mean? By Dr. Elin Röös (Swedish University of Agricultural Science, Sweden)

The YINI Symposium “Sustainable diets” was held in Baltimore on the 10th June 2019. This scientific symposium gathered renowned scientists to discuss sustainable diets. Elin Röös is an Associate Senior Lecturer at the Department of Energy and Technology at the Swedish University of Agricultural Sciences (SLU).  Her opening presentation focused on exploring sustainable diets in the context of the current food system and its contribution to climate change. She underlined that it made sense in the environmental context to speak via a video link from Sweden as flying to Baltimore would have generated 2 tonnes of CO2!

Climate change or global warming refers to a gradual warming of the earth’s atmosphere due to increased emissions of carbon dioxide (CO2) and other greenhouse gases (GHGs) which trap heat and make the planet warmer. Transport, electricity production, industry and agricultural are primary sources of GHGs. The Intergovernmental Panel on Climate Change (IPCC), has a target of keeping temperature increases below 1.5C in order to limit the impact of climate change.  In order to achieve this goal,  there is an urgent need both for changes in current supply systems, as well as large scale technological innovations to help reduce emissions as swiftly as possible

The current food system is a main contributor to climate change with the farming industry (land usage as well as inputs such as fertilisers and pesticides) generating 15 – 25% of global GHGs and food production, transport and waste disposal generating a further 5-10% of global GHGs,  a total of 20-35% of global GHGs.  Food production is also major factor in terms of planetary boundary* concerns, such as deforestation, biodiversity loss and water pollution.

A study by Roos et al. (2014) evaluating the Swedish diet, which is fairly typical of high-income countries found animal products, beef (30%)  other meats and eggs (23%) and dairy products (17%) accounted for more than 70% of emissions.  The differences in emissions at a country level is striking as countries with a  high meat consumption, such as Australia, US and Brazil produce more than 50% more C02 than countries with a low meat consumption.

What is a sustainable diet?

The current food production system is neither sustainable, accessible or economically fair.  Higher income countries, while having good access to healthy foods, are creating an environmental impact, which is several times higher than those in low-income countries. The global food system is also inadequate in terms of being able to feed the world’s population, with the burden of malnutrition in terms of energy deficiency, obesity and/or nutrient deficiency remaining unacceptably high.

The EAT-Lancet report (2019) details the proportion of foods which can be eaten in order to match the goal of reducing the environmental impact, setting targets and limits in terms of GHG emissions and resources,  while ensuring nutritional targets of macro and micronutrients are achieved at a population level.

A multi-faceted approach is needed to ensure our food system is sustainable, taking into consideration economic, environmental and nutritional needs.  A switch to more plant-based diets along with improvements in production efficiency and a focus on waste reduction will reduce global GHGs.

The type and amounts of meat and dairy in the context of a sustainable diet, still needs to be further defined. While these foods have a higher environmental footprint than plant-based foods, they are a  source of key micronutrients essential for our health, such as iron, zinc and calcium.

As a closing note, livestock can play a positive role in supporting the environment. An efficient food production system should limit livestock production to grazing pastures,  which cannot be used for growing crops suitable for direct human consumption.  Ruminant animals convert plant fibre to energy, producing high quality meat and milk, while the by-products such as manure, enhance the biodiversity and fertility of the soil, positively contributing to food security.

*Planetary boundaries is a concept involving Earth system processes which contain nine environmental boundaries, based on scientific evidence that human actions have become the main driver of global environmental change.

**Sustainable diets are those diets with low environmental impacts, which contribute to food and nutrition security and to healthy life for present and future generations. Sustainable diets are protective and respectful of biodiversity and ecosystems, culturally acceptable, accessible, economically fair and affordable; nutritionally adequate, safe and healthy; while optimizing natural and human resources. (FAO, 2010, Sustainable Diets and Biodiversity.