We are happy to welcome Cheryl Sternman Rule for an interview on our website! Cheryl is a food writer and has contributed to a wide variety of well-known magazines and websites. She is also the voice behind the award-winning food blog 5 Second Rule. In this interview she presents her work on her new book “Yogurt Culture”.

In your new book ‘Yogurt Culture’, you describe the differences in yogurt consumption from a global point of view, more specifically in the Nomadic countries. What are the differences and similarities with the Western yogurt habits and what can we learn from their culture?

Yogurt-eating habits in nomadic countries often center on transforming yogurt into drier forms to increase its longevity and portability. As we all know, yogurt – as a fermented food – has a longer shelf-life than fresh milk, but it will still eventually spoil due to its high moisture content. I learned that in parts of Mongolia, for example, yogurt is hung and the whey is strained away. The solids are left in the sun to dry out, then pressed between stones or boards and then cut into blocks for easy transport – essential for nomads who must follow their livestock from place to place and who need sustenance while they work.

In Western countries, we’re more likely to transform yogurt using different flavors and innovative types of packaging. I suppose one similarity is that westerners do like their yogurt to be portable as well (for work, the gym, the lunchbox), hence the advent of yogurt tubes and squeezable pouches. Does this make us more like nomads? I don’t think so – we turn to these products more for convenience (and often for children) than out of necessity.

The name ‘Yogurt Culture’ holds a twofold meaning, on one hand there are the cross cultural differences, but on the other hand it refers to the live and active culture of bacteria in yogurt. How are the health benefits of yogurt bacteria described across different cultures?

One of my sources who grew up in South India told me that his mother used to make sure he ate “curd rice” (a mixture of yogurt and rice) before going to an important meeting. She held a strong cultural belief that yogurt’s probiotics promote mental acuity and stability. New research continues to explore the connection between probiotics and both mood and brain health, so her instincts were well-grounded.

A source born in Pakistan told me farmers drink salty lassis to replenish their electrolytes after they’ve worked in the sun all day. People also believe yogurt’s good bacteria might counteract any contaminants lurking in the drinking water.

In Eritrea, yogurt is often eating during the predawn meals during the Muslim holy days of Ramadan. The protein in yogurt must give those observing the daytime fast enough energy and staying power to get through the day.

In the United States, we tend to focus on the relationship between good bacteria and digestion.

What’s nice about yogurt is that its health benefits are so varied. Many world cultures therefore have good reason to include yogurt as an integral part of the diet.

You describe yogurt as simple and pure, but in the Western culture we often prefer the sweet variety. According to your experience, why and how is yogurt considered as a versatile food and what is your favorite trend?

You’re absolutely right that people in many western countries have known yogurt as a presweetened food for many years, but thankfully I think is beginning to change. We’re now embracing foods that are tart, sour, or “ferment-y,” whether kimchi, sauerkraut, or cultured dairy such as yogurt and kefir. For starters, I encourage people to drizzle their yogurt with olive oil and sprinkle it with salt; opening up yogurt’s savory pathways can be incredibly exciting. It’s a food that pairs just as well with vegetables as with fruit. (That said, I do love a fruity, not-too-sweet frozen yogurt, like Ultimate Strawberry Frozen Yogurt from Yogurt Culture.)

Every day I tell people to mix their plain yogurt with herbs, spices, and ingredients like shallots and garlic. They seem surprised until they realize that people in the rest of the world have been eating yogurt like this for a very, very long time. I’ve got so many globally-inspired recipes both in the cookbook and on the Team Yogurt website. I really hope folks will check them out! 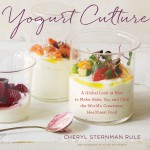