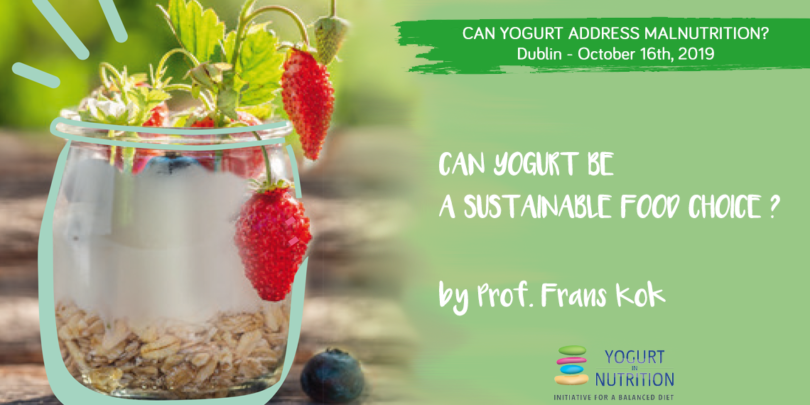 He began talking about global warming and he showed what all economic sectors globally are contributing to the global green house gas emissions. Besides transportation, heavy industry and electricity, agriculture is estimated to contribute about 24% of Global Green House Gas Emissions (GHGEs), distributed 1/3 in production, 1/3 in consumption and 1/3 in food loss and waste.

And this is very important because in the field of agriculture and food consumption, we need to do something in order to adhere to the Paris Climate Agreement that was published in 2015. The Paris Climate Agreement was adopted by 195 countries with the objective of decreasing global warming below 2°C compared to preindustrial levels, either by 2030 or 2050 with the aspirational goal being 1.5°C.

He went on to describe what the United Kingdom (UK) Committee on Climate Change concluded that is needed to do in order to achieve these limits to be able to achieve 60% reduction from the 1990 levels for all sectors by 2030, including the food sector.

As we can see in the table above, the environmental reduction requirements for the UK food consumption would mean that the total carbon footprint would go from the 1990 levels of 152 to 106.5 in 2030, which would be a 30% decrease. And if we calculate this carbon footprint on an individual level, at the moment the current footprint is 5.17 and it should decrease by 2030 to 4.09. In Europe there is quite a range in CO2 emissions from the diet.

CO2 emissions from the diet

Professor Frans J. Kok showed this graphic with individual data from Denmark, Czech Republic, Italy and France. Red and processed meat are the main contributor to GHGEs, contributing from 32-45 %. Milk contributes from 5-12% and cheese 7- 14% to GHGEs.

He also shared what is going on globally. And as we can see below there probably needs to be a transition from animal to plant proteins. The green bars show what the current per capita consumption of plant-based protein is in different countries and the red bars are the animal proteins.

This shows that there is quite a burden in the US & Canada, in the European Union, in Brazil, Middle East, China, the former Soviet Union and Latin America, where there is a huge over consumption of proteins if we look at the average intake per capita of 50 grams of protein per day.

And there is a real challenge to try to make important changes in the transition from animal protein to plant protein. But these important changes, replacing red meat and meat products with other quality proteins (such as low fat dairy, nuts, fish and poultry), also have a reduced risk of mortality for chronic diseases as it is indicated in the EAT Lancet paper that was published in the beginning of 2019.

If replacing red meat by low fat dairy for example we would see on a global level about 10-15% reduction in the risk of mortality in chronic diseases.

It turns out that the current WHO healthy diet is contributing quite well, but there is a lot of work to be done to align the FBDGs with the 2030 targets.

The EAT Lancet paper was really a landmark paper. It is a global healthy reference diet for environmental sustainability and if we look at this plate 86% of the food products (in weight) should be plant based and 14% from animal sources. This is probably almost impossible to achieve, but at least that would be an important goal to base the future FBDGs on.

Their global healthy reference diet was based on all the current epidemiological evidence on healthy diet in relation to chronic diseases as a global reference diet for the whole world. Instead of elimination, the intake of beef for example should be limited to not more than 7g/day (between 0-14g). And in the case of dairy food, the whole milk and derivative equivalents like cheese should not be more than 250g/day (between 0-500g), which would be compatible with the 2 servings per day.

The planetary health diet was defined and they looked at how this diet would contribute to the global warming, including also things like production of food. So what they did in this paper, they looked at the environmental effects in case of business as usual projection for 2050, for food production and consumption. And as we can see, 75% of GHGEs impact on climate will come from animal source foods, if nothing would change until 2050.

If we look at the staple crops, we see that they would have not so much impact on GHGEs but would put 30-50% pressure on other environmental domains like land use, fresh water use, nitrogen, phosphorus application as well as the biodiversity of soil.

If nothing would happen, the environmental burden would increase up to 90% from 2010 to 2050 both in consumption as well as in production in the whole food chain, thus important changes are necessary. On the other side if we go to a more preventable situation and improve the food production as defined in the EAT Lancet report then we see that things are becoming much better.

So this publication is putting a point on the horizon indicating how important it is to make necessary changes. And the question is, and they stated it, what measures are needed? Dietary shift, improve production practices, reduce waste and food loss, to stay within the food production consumption boundaries to reach the Paris agreement.

Overall, the current FBDGs for meat are too high to reach the sustainable future diets, and we see that meat should be reduced but in the particular case of milk the average should remain the same as the current situation.

In order to save our planet Prof. Frans J. Kok described an optimization approach:

He indicated that there are limitations in the current research and that we need technological innovations and new production systems in order to achieve the 2050 targets. The European Nutrition Conference focus was on Malnutrition in an Obese World, but Prof. Frans J. Kok’s presentation focused mainly on sustainability.

Key messages from his presentation:

Personally, I consider that the future FBDGs should be similar to the Mediterranean diet, which is mainly plant based with large amounts of fruits and vegetables, legumes such as beans and lentils, nuts, whole grains, extra virgin olive oil (EVOO) and a moderate consumption of dairy products (1-2 servings/day).