A new study, presented during the 3rd Yogurt Summit on the Health Effects of Yogurt, evaluated the lifestyle habits of yogurt consumers and non-consumers in Brazil. The authors found a higher daily intake of vitamins and minerals among yogurt consumers, who demonstrated a healthier lifestyle.

The lifestyle of 2.610 adults (18-59 years) in São Paulo was examined using a cross-sectional survey. Half of the participants were regular yogurt consumers with more than 4 servings a week, the other half consumed yogurt less than once a week. The household interviews took place in two phases: firstly, they collected data on consumption frequency of whole and skimmed yogurt and fermented milk, on demographic and socioeconomic status. Secondly, lifestyle characteristics, habitual food intake and presence of morbidity were surveyed.

Yogurt is associated with a healthier lifestyle 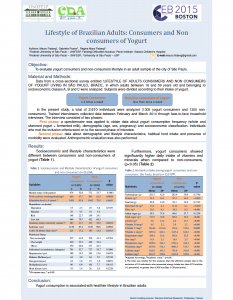