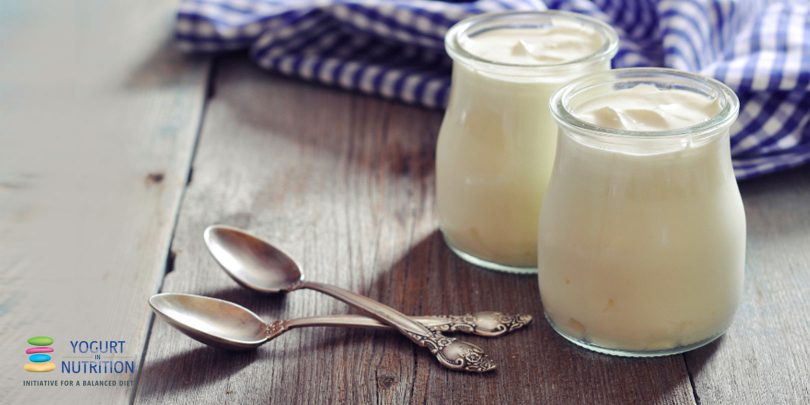 From a regulatory point of view, Yogurt is a milk product obtained by fermentation of milk specific microorganisms, which shall be viable, active and abundant in the product Lactobacillus delbrueckii subsp. bulgaricus and Streptococcus thermophilus.

How is yogurt made?

Manufacturers have responded to the growth in yogurt consumption by introducing many different types of yogurt, including Greek yogurt, low-fat and no-fat yogurt, creamy, drinking, bio-yogurt, frozen, etc… However, the basic ingredients and manufacturing are essentially consistent: 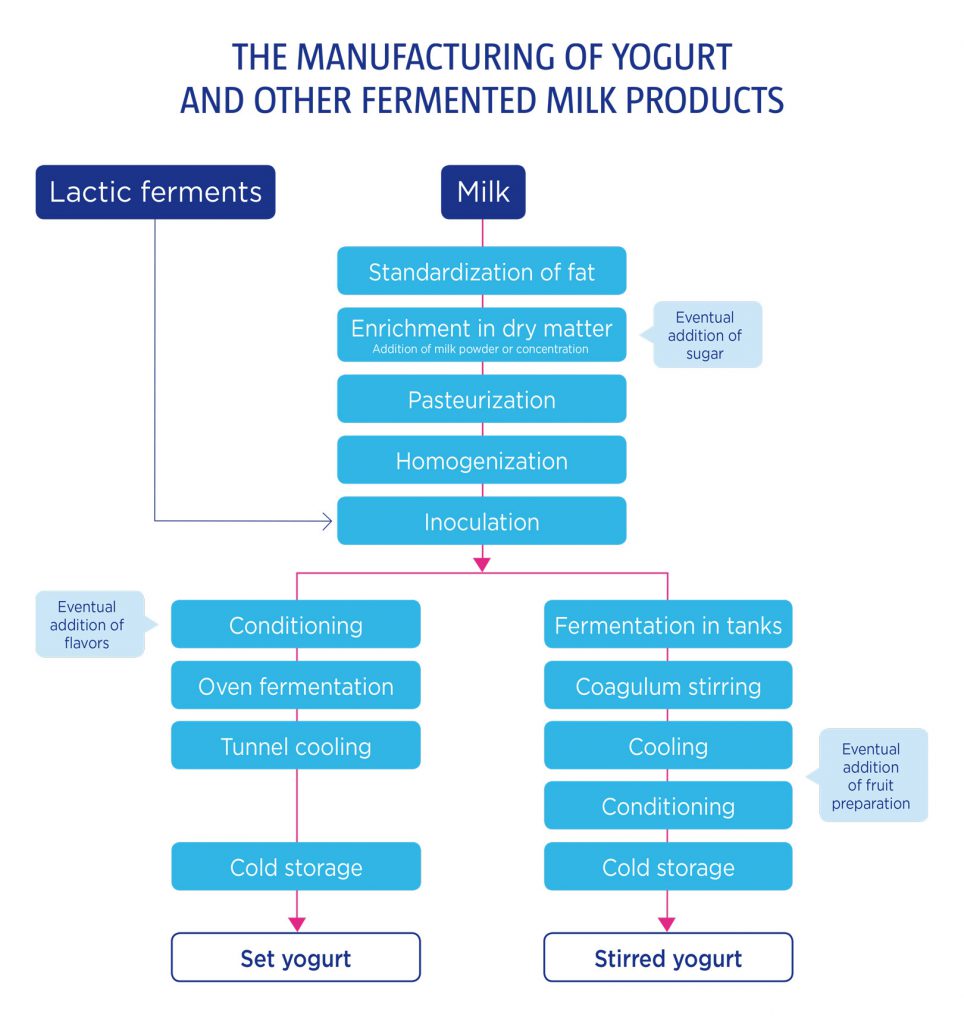 What is the history of yogurt?

Yogurt is a very ancient food. The first traces of it have been found between 10 000 and 5 000 BCE in the Neolithic period, a time when nomadic people were turning themselves to a new way of life and the beginnings of agriculture slowly led to sedentary lifestyle.  At that time, the populations were also starting to domesticate animals such as cows, goats, buffalo, yaks and camels, which produced milk.

In the meantime, herdsmen in the Middle East used animal gut to make bags dedicated to milk transportation. Thus intestinal enzymes were in contact with milk, and may have caused it to curdle and sour. Such milk was easier to carry, and was to some extent the first yogurt. Also, these changes observed with the milk structure may have led to the understanding that a dairy product could be conserved for a relatively long period, as it is well known today.

Yogurt made its way through centuries, spreading all around the world. Yogurt was introduced into Western Europe in the 16th century by the King of France, Francois the 1st, after he was given it as a treatment for severe diarrhea, by a doctor from Turkey.

Before anything was known about bacteria, lactose in milk was converted to lactic acid thanks to starter cultures, thus prevent milk from pathogens. This transformation was operated by inoculating fresh milk with small amounts of sour milk. For people living in precarious conditions, such fermented dairy products were a safe habit to preserve milk.

In 1909, Nobel Prize-winner Elie Metchnikoff suggested that ageing is caused by toxic bacteria in the gut and that lactic acid could extend life.

Throughout the 20th century, yogurt began to be manufactured in order to be sold commercially. The first yogurt factory was opened in 1932, in France by Daniel Carasso. Its potential health benefits drew so much interest that yogurt was first sold in pharmacies. Today, yogurt is widely recognized as a healthy food and is still part of many diets around the world.

What are the different types of yogurt?

There is a lot of varieties of yogurt on the market, depending of the manufacturing procedure and ingredients, added to plain yogurt before or after fermentation:

What is Greek yogurt?

Greek yogurt is traditionally obtained by straining normal yogurt, which gives it a thicker texture. 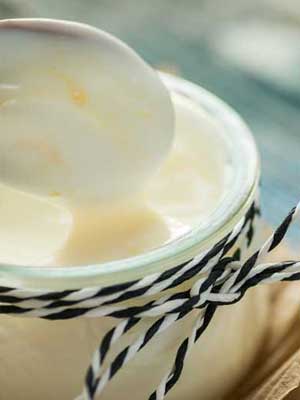 It is a concentrated fermented milk as defined by Codex Alimentarius, which specifies that the protein content must be at least 5.6 g per 100 g.

During the draining process, the aqueous part of the milk – the whey or lactoserum – is removed, which explains the low lactose content of Greek yogurt.

Reading the label provides useful clarifications on the real nature of the yogurt.

What is lactic acid fermentation?

Lactic acid fermentation is the process, whereby milk is converted into yogurt. It results from the action of lactic ferments, which are for yogurt two specific micro-organisms: Streptococcus thermophilus and Lactobacillus delbrueckii subsp. bulgaricus.

During the fermentation, the milk sugar (lactose) is first converted into glucose and galactose, after what these simple sugars are converted into lactic acid.

The formation of lactic acid gives some acidity (pH 4.5), which helps to coagulate the proteins (caseins) and set the milk, producing the specific texture of yogurt. Lactic acid fermentation also produces compounds (carbon dioxide, peptides, amino acids…) that give yogurt its distinctive flavor.

What is the nutrient composition of Yogurt? Some Nutrition Facts

Yogurt is an excellent source of protein with a high quality score, linked to high digestibility and richness in essential amino acids. Besides, the proteins contained in yogurt are more easily digestible than these of standard milk. This could be the result of the fermentation process, which breaks them in smaller entities. The high quality proteins of yogurt bring lasting satiety. For instance, a study found that, in mid-afternoon, women were less hungry after having a high protein yogurt than after having high-fat crackers or chocolate.

Yogurt is a source of vitamins and micronutrients (calcium, potassium). It contains also magnesium and the magnesium concentrations in milk are relatively constant, with some variations throughout lactation: around 12mg per 100g (Haug, et al. 2007).

The key to healthy snacking is based on the nutrient density and the eating habits. Good eating habits should incorporate eating only while hungry : not only for pleasure or in response to stress or boredom, for example.

The portion size of the snacks is important too. An “ideal” healthy snack should have a high nutrient density. In contrast, an unhealthy snack has a low nutrient content relative to its energy content (also qualified as rich in “empty calories”). For instance, Yogurt can be a healthy snack.

What are the health benefits of Yogurt?

Regular yogurt intake appears necessary to provide a sustainable benefit on host. Yogurt and dairy products are recognized by most regulatory authorities and scientific institutions as part of a healthy diet (cf. American guidelines or French guidelines).

Yogurt is characterized by its living bacteria, which, in addition to its high nutrient density and its palatability, have been demonstrated to improve lactose digestion (EFSA 2010b).

Recent studies suggest that yogurt could play a valuable role on health. Please discover all the beneficial effects of yogurt on health on each following topics:

Why is yogurt recommended from children to elderly people?

Bone health matters all life long. Still, there are two major moments in life where need people need to be especially careful about bones; youth and old age.

Yogurt is rich protein and several micronutrients that matters for bone health, such as calcium, vitamin D and potassium. Moreover, the live bacteria contained in yogurts and added probiotics may improve calcium absorption and therefore enhance bone health.

The regular consumption of yogurt is associated to improved bone health in children and teenagers. A study was conducted among Chinese children to assess the impact of a supplementation in yogurt: during 9 months, for 5 days a week, one yogurt was added to the usual diet of preschool children. This study revealed that the children who consumed more yogurt had a better growth, height and weight gain, and increased their bone mineral density higher than those who didn’t receive supplementary yogurts.

Besides, yogurt is advised to the elderly for promoting bone health. To prevent osteoporosis, the studies conducted in older adults sustain the strategy of encouraging them to eat more yogurts, especially vitamin D and calcium fortified yogurts. Also, several studies support the promotion of yogurt among elderly people by showing associations between hip fracture and yogurt: in older adults yogurt consumption is linked to lower hip fracture risk. 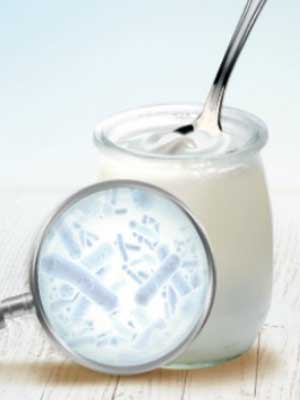 It is now acknowledged that what we eat can influence the microorganisms hosted in our gut. Fermentation includes transformation of raw foods by microorganisms. This particular process may add benefits to the foods and this draws attention from research.

Yogurt is a fermented dairy product containing millions of live micro-organisms, which can influence the composition of gut microbiota and therefore enhance gut health.

Yogurt may also protect the intestinal barrier by fostering the production of mucin.

Can I eat yogurt when I am lactose intolerant?

Lactose intolerance can result from a natural physiological phenomenon. Lactose is the natural sugar of milk digested by humans thanks to an enzyme called lactase. Lactase activity decreases from infancy until adulthood and may lead to a deficiency. This intolerance affects nearly three quarters of the world’s population with a frequency varying geographically by country and region and by the age of the individual.

Lactase deficiency causes maldigestion of lactose, which often leads to total or partial avoidance of milk and dairy products, which is not always justified. It can entail additional difficulty in satisfying the child’s or adult’s calcium needs and risks their bone health.

Contrary to conventional wisdom, the consumption of dairy products can be maintained, subject to certain hygiene and dietary rules. Incorporating dairy products, including yogurt, improves the quality of the diet, and reduces nutrient deficiencies.

The lactose in yogurt is digested more efficiently than other dairy sources of lactose because the bacteria inherent in yogurt assist with its digestion. Yogurt has the particular characteristic of being well tolerated by individuals who find lactose difficult to digest. It allows them to get all the nutritional benefits of milk. It is therefore a useful alternative to milk to meet daily calcium needs and to help prevent osteoporosis. This is why the regular consumption of at least one serving of yogurt per day is highly recommended. It improves lactose digestion thanks to its specific live cultures (Streptococcus thermophilus and Lactobacillus bulgaricus),which remain active all the way through the digestive tract. Furthermore, its thicker-than-milk consistency leaves more time for the residual lactase to act.

Should I avoid yogurt consumption if I have a metabolic syndrome or cardiovascular diseases? 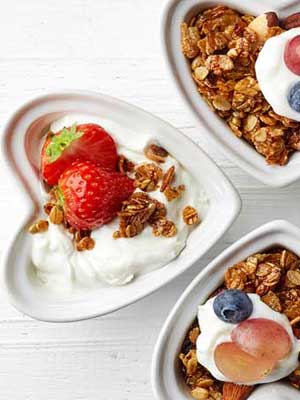 Studies have shown that yogurt and dairy product could act on most of the components of metabolic health, including :

A systematic review of the evidence suggested a potential benefit of dairy consumption on the risk of having Metabolic Syndrome (Crichton, et al. 2011).

Learn more about the effects and visit our pages on cardiovascular health.

Is it possible to consume yogurt while suffuring from allergy to cow’s milk?

Allergy to cow’s milk protein is an immune response to a minute quantity of cow’s milk protein, and is usually detected in early childhood. It only affects 2% to 6% of infants and disappears in two-thirds of cases around the age of 2 or 3. In France, this affects 0.6% of children under the age of 15 (and is far less prevalent than egg or peanut allergies).

Very few adults (0.1% to 0.5%) are allergic to milk. The symptoms are mainly digestive and, depending on the individual, may be accompanied by, for instance, muscle or joint pain, headaches, nausea, lethargy, acne, sore throat. Often allergy to cow’s milk protein is confused with lactose intolerance, but unlike lactose intolerance, allergy to cow’s milk requires to completely avoid dairy products.