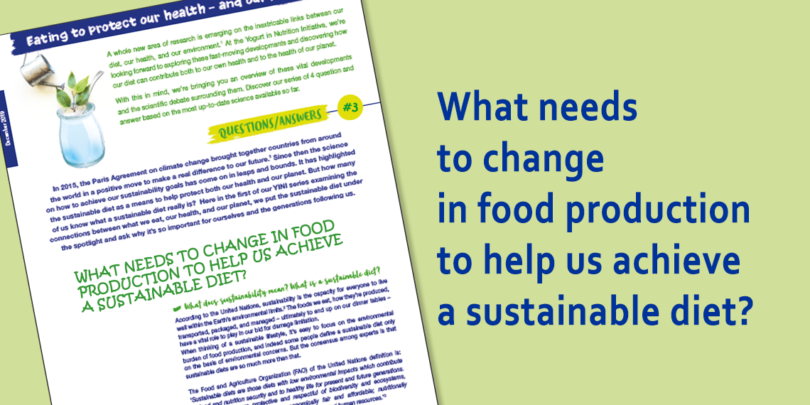 Join us in exploring the scientific discoveries that are supporting our shift towards a sustainable diet for all. In this third post of the Yogurt in Nutrition Initiative series, we focus on the world of food production and the steps being taken to transform it to provide for our growing global population – in a way that protects both our health and our environment.

Feeding the world’s growing population will require widespread changes in the way we produce our food, especially in the face of mounting pressure from climate change.

Recognition of this need is providing the stimulus for ground-breaking research, paving the way to a transformation in food production that will not only feed the world’s growing population, but will also give us a vital opportunity to boost human health.

At the same time, new approaches to sustainable food production system must set us firmly on track for meeting the goals of the 2015 Paris Agreement to curb climate change, by limiting global warming to well below 2oC above pre-industrial levels and to restrict the increase to 1.5°C.

To achieve this climate target, our world’s agriculture needs to switch from a major greenhouse gas producer to one that captures greenhouse gasses by acting as a sink for carbon emissions – in the same way as our forests relieve pressure on the environment by trapping and locking in carbon dioxide.

Our food system should also achieve the urgent transformation needed to conserve and use nature sustainably – halting the alarming decline in global biodiversity that has a profound impact on people around the world, as highlighted by a landmark international report released in 2019.1

With these goals in mind, scientists are testing efficient and eco-friendly agriculture that reduces the burden on our limited land and water resources while meeting our growing nutritional and health needs. They’ve made some important inroads into finding the best way forwards.

What are the challenges that need to be overcome in food production?

The big challenge is to balance the increasing demands of nutritional and health needs for the 10 billion people predicted to live on Earth by 2050 with the current negative environmental impact of our food production.

Agriculture can disturb the environment as it expands into other ecosystems, destroying natural habitats of wild species with harmful effects on biodiversity, degradation of soils and reduced stored carbon – when forests are cleared and burned, for example. As agriculture intensifies, it increases the use of energy, water and chemicals such as fertilisers, pesticides, and herbicides, leading to water depletion and pollution.3

As a result of such human activities, over a million animal and plant species are threatened with extinction, many within the next few decades – the fastest rate throughout human history.1 Such species make up the ecosystems on which populations around the world depend for their food and living.

What needs to change in order to achieve more sustainable food production?

The main direction for changes needed to improve the environmental footprint of our food production are summarised by the EAT-Lancet Commission along with the intergovernmental body on biodiversity and ecosystems, and other recent scientific studies aimed at identifying healthy diets and sustainable food production.1,4

As an example, EAT-Lancet considers that our food production should:4

A key step will be to feed the world’s population on only existing agricultural land, the EAT-Lancet Commission recommends. This means stopping the expansion of agricultural land so that it doesn’t encroach further on forests and other natural ecosystems. Along with limiting use of pesticides, preserving these natural environments is crucial to maintaining our planet’s plummeting biodiversity.1

Oceans should also be managed to ensure that there’ll be enough fish in the sea to feed our future generations, says EAT-Lancet.4

Agriculture needs to use the land more efficiently, with improved use of fertilisers and water. Currently, according to the World Wide Fund for Nature (WWF), as much as 70% of all fresh water withdrawn from the ground is used for agricultural irrigation, which often has a major impact on water availability and quality.5

The report from the intergovernmental body on biodiversity recommends an integrated approach to solving the problems, preserving ecosystems and allowing us to use nature sustainably.1 Conservation programmes, protection of watersheds, and incentives and sanctions to reduce pollution are among the measures needed to promote better agricultural practices and use of resources. Local communities and indigenous people have a key role to play in such measures, says the report.

How do we balance the environmental impact of the food we produce with its nutritional benefits?

For a food system to be sustainable, it must take account of the combination of nutritional, health, socioeconomic and environmental impacts – four closely linked dimensions.

EAT-Lancet recommends shifting agricultural priorities so that we produce not only enough calories to cope with our growing population but enough diversity of high-quality foods to provide us with a healthy nutrition. We’ll need a variety of nutritious foods rather than large amounts of just a few crops.4

‘Agriculture and fisheries must not only produce enough calories to feed a growing global population but must also produce a diversity of foods that nurture human health and support environmental sustainability.’ – EAT-Lancet, 20194

The EAT-Lancet recommendations raise dilemmas and controversies, particularly regarding livestock farming. Meat especially is associated with high greenhouse gas emissions and the use of large quantities of land, water and fertilisers. It’s not just because of the animals themselves but also because of the feed they need. In Europe, for example, 58% of available cereals and 67% of oilseed/protein crops are used to feed livestock.6

But many people around the world, especially small-holder farmers in low-income countries, depend on livestock for their livelihoods and as a vital supply of nutrients which they may otherwise find hard to get from their diet.

Dairy production in particular is seen as a powerful tool to reduce rural poverty, especially in low-income countries.7 By retaining dairy cows, populations around the world can benefit from the nutrient-rich content of dairy products and so find it easier to meet their nutritional needs than if they were growing plant-based foods alone.

Clearly, livestock production should be considered according to specific contexts. Studies have suggested that livestock, produced in a sustainable way and consumed in reasonable quantities, can provide nutritional, ecological, and economic benefits. Sustainable livestock production can be achieved by using pasture-land that couldn’t be used for growing crops, and by feeding the cows on crop left-over yields, the studies suggest (see below).

The EAT-Lancet report provides global recommendations to steer us towards sustainable food production. However, in practice, studies suggest that the sustainable answer to food production is likely to differ from region to region, reflecting local climate, geography, culture, and economies.

Scientists are exploring the options, developing regenerative agriculture models that preserve and renew our resources while providing reliable and safe access to healthy foods for all. Their aim is to pave the way for policy-makers and scientists to make informed decisions about guiding agriculture for the future.

Among these pioneering studies is a project called Ten Years for Agroecology in Europe (TYFA).6 It has modelled a possible option for an eco-friendly agricultural scenario for Europe in 2050 and compared it with today’s European food system.

The TYFA scenario abandons pesticides and synthetic fertilisers, stops massive imports of animal feed (such as soya), redeploys natural grasslands and extends the use of hedges, trees, and ponds. At the same time, the model assumes that people adopt healthy diets with fewer animal products and more fruit and vegetables. It allows a large capacity for grazing livestock, but limited pork and poultry, which are mainly fed with imported feed. Hence the TYFA diet still contains about 100 g/day of meat and an equivalent of 300 g/day of milk as dairy products.

This kind of ecological agriculture tends to be less productive than current farming methods in Europe and so is usually considered incompatible with producing enough food for the population while also tackling climate change.

But the model showed that, despite a 35% fall in production compared with 2010, this envisioned scenario would:

Another study has modelled a sustainable food system scenario for Norway, Sweden, Denmark and Finland.2 Issued from a consultative process involving five local environmental non-governmental organisations (NGOs), the Future Food Vision for the Nordics is based on organic farming and local food production. To limit direct competition between animal feed and food for people, livestock are fed only from ‘left-over streams,’ – by-products from food production, pastures and perennial grass/clover mixtures.

In the model, consumption of meat, especially non-ruminant meat, is reduced by 81% compared with current consumption in the Nordic countries, but consumption of dairy products remains about the same as it is currently. The researchers estimated that 37 million people could be supplied using this agricultural scenario – much more than the current population of 26 million people. It would cause greenhouse gas emissions of only 0.48 tCO2e (tonnes of carbon dioxide equivalent – a measure allowing comparison of the emissions of other greenhouse gases relative to one unit of carbon dioxide) per diet per year.