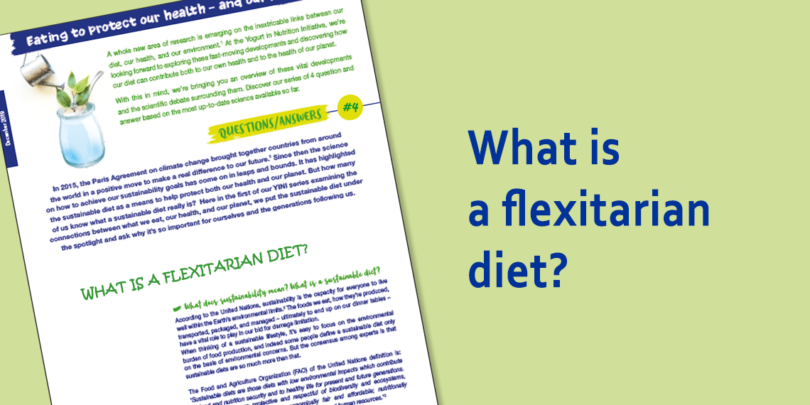 Do you want to contribute to better health for ourselves and our planet but don’t know where to start? Scientists are advising that we all shift to a plant-rich diet to achieve a sustainable future, but this can seem a daunting prospect. In this 4th post in the Yogurt in Nutrition Initiative series on sustainable diets, we look at the evidence supporting the types of diets, such as flexitarianism, that could help provide the solution.

What is flexitarism ? What is a flexitarian diet?

A flexitarian diet encourages variety rather than restriction as you don’t have to exclude any specific food. So it’s different from a vegetarian diet, which excludes all meat, fish and poultry, and from a vegan diet which eliminates all animal products including eggs, dairy products and honey. Several variations of the vegetarian diet also exist, such as the pesco-vegetarian or pescatarian, which adds fish and seafood to the diet, and lacto-vegetarian which includes dairy products as well as plant-based foods.

As flexitarian diets don’t completely eliminate meat and still maintain dairy food intake, they are a favourite among people who want to lead a healthier, more sustainable lifestyle but find vegetarianism too restrictive.

That’s why flexitarianism is becoming increasingly popular across the world, the trend being driven initially in the USA and Australia with the aim of managing body weight.1,2 More recently, people’s motivation to move towards flexitarianism is more to do with global health and environmental concerns.

“A flexitarian diet is largely plant-based but can optionally include modest amounts of fish, meat and dairy foods.” – EAT-Lancet 20193

Scientists view the flexitarian diet as a flagship of sustainable diets for people all over the world.3,4

That’s because research shows that we need to shift to more plant-based diets globally, both for our own good and for the good of the planet. Especially in affluent countries, people need to eat less meat to relieve pressure on the environment while meeting nutritional and health demands.

But many people feel that switching to a vegetarian or vegan diet doesn’t fit with their lifestyle. If you’re used to your regular Sunday roast or to a summer’s evening BBQ, it can seem like too big a step to take.

A flexitarian diet can provide a practical solution. For most people, it’s realistic way to achieve the aim of significantly reducing the amount of animal-source foods in the diet. At the same time, a flexitarian diet gives you the freedom to choose a wider variety of foods than vegetarian or vegan diets.

So it’s a win-win situation – you still get to tuck into your favourite meals, albeit less meat-heavy than in the past, knowing that the environment is better off too!

A flexitarian diet is all about eating better and healthier, high-quality foods, that have been produced under conditions more respectful of the environment – and preferably locally-sourced.

Becoming a flexitarian means moving towards a diet that’s rich in fruits and vegetables, legumes, whole grains, nuts and seeds, but low in sugar and meat.6 You’ll continue to include dairy products in your diet as they’re a great source of several important nutrients, but their impact on the environment is much less than that of beef meat; in fact, 5- to 6-times less per g protein.7

But it’s not all about what’s good for you. For a diet to be sustainable, we have to enjoy our food – a flexitarian diet means you don’t have to give up the pleasure of eating some of the foods you enjoy.

What are the nutritional advantages of a flexitarian diet?

Nutritionally, the flexitarian diet is likely to hold some advantages over vegan and vegetarian diets, as well as over the current typical diet of most westernised countries.

Because humans have evolved as omnivores, vegans and vegetarians need to compensate for the nutrients that they’d otherwise get through eating animal products. If they fail to do so, they risk developing nutritional deficiencies and health problems.

This applies especially for groups with specific nutritional needs – teenagers, pregnant women, the elderly or people with a specific chronic disease.

These groups may need to take specific supplements to make up for the shortfall in the diet. Vegan diets in particular may lead to deficiencies in vitamin B2 and B12 which are provided naturally only by animal products, iron and zinc which are present particularly in meat, or calcium and iodine which come largely from dairy products.

In a flexitarian diet, the large amount of plant-based foods balanced with a significant intake of dairy products and low amount of meat generally provides an all-round healthy mix of high-quality protein, fibre, vitamins, minerals and healthy fatty acids.

What does a flexitarian diet mean for your health?

The healthy mix of nutrients in the flexitarian diet spells good news for our health, studies suggesting benefits for weight control and blood pressure, and reduced risk of type 2 diabetes compared with the typical non-vegetarian diet.8

The flexitarian diet recognises that, while meat provides valuable protein and nutrients, eating too much red meat and particularly processed meat over the long term may increase the risk of heart disease, stroke, and certain forms of cancer such as colon cancer.8

A global modelling study of diets that were in line with available evidence on healthy eating found that adopting a flexitarian diet is associated with a sharp fall in premature death – the reduction was 19% for the flexitarian diet and 22% for the vegan diet.6 The reduction in early deaths reflected less heart disease, stroke, and type 2 diabetes. In this analysis, the flexitarian diet was defined to reflect the dietary recommendations for healthy and more plant-based diets. It excluded processed meat but included:

What impact would a flexitarian food system have on the environment?

Latest studies suggest that switching to flexitarian diets could shrink our carbon footprint and help to put us on course for reaching the goals set for 2050 by the Paris climate Agreement, to which 195 countries signed up in 2016.9

In the first of two studies carried out by the WWF to develop healthy and sustainable diets, a flexitarian diet was modelled in the UK, adapted for adolescents, adults and elderly people.4

The researchers designed the diets assuming that food consumption and food production should contribute equally to the reduction we need to make in greenhouse gas emissions in our food system. The diets would make a major contribution to reaching the targets set for the UK by the Paris Agreement, while still meeting the nutritional needs of the different groups studied.

In this model, the composition of the flexitarian diet was kept as close as possible to the average UK diet for each group, but with much less meat, particularly beef and lamb. The diet also contained less cheese, but other dairy – one of the most important sources of iodine in the UK diet – remained similar to current consumption. Legumes, nuts, vegetables and oilseeds were all increased in the diet.

In a second study, the WWF modelled a flexitarian diet for the French population.5 Compared with the current average French diet, the flexitarian diet had a 66% reduction in the amount of beef and veal eaten and a 69% reduction in industrially-processed foods containing fats, salt and sugars. It also cut down on wild-caught fish and on foods made from refined flour. In their place were wholegrain flours, more vegetables, cereals and legumes. Meanwhile, consumption of dairy products remained the same as in the current average French diet.

The researchers carried out their analysis for a family of four – two adults, a teenager and a child aged under 10 years. They found that the flexitarian diet made it possible to reduce the family’s greenhouse gas emissions by 38% while fully covering their nutritional needs.

Will a flexitarian diet increase your shopping bill?

The good news is that a flexitarian diet allows you to eat more healthily and help protect the planet – all without adding to your weekly shopping bill.

A Swiss study modelling nine alternative diets including current, vegetarian and flexitarian diets, found that healthy and nutritious diets in which we cut down on meat, can come hand-in-hand with environmental sustainability goals, without putting extra strain on our purse.10 That’s because plant-based foods such as legumes, nuts and seeds tend to be cheaper than the meat they are replacing.

In the WWF model of a sustainable diet for France, the composition of the flexitarian diet resulted in a 19% saving in the daily food budget for an adult and a 21% reduction in the average cost of a weekly food shop for a family of four, compared with the current diet.5

The cost savings made with the flexitarian diet would make it possible to introduce around 50% of organic and other certified products into our food shopping for almost the same amount of money as for the current diet, the researchers calculated. In other words, this flexitarian diet in which about half the foods are organic, would cost a family 190 Euros per week, compared with the current weekly food shop of 187 Euros.

In the UK, the WWF’s flexitarian diet models was associated with a small cost increase compared with the current diet, mainly due to the increased amounts of fish and vegetables.4 But the WWF points out that food prices are set to rise in coming years, with the higher increases being seen for foods based on animal feed rather than the foods that dominate the flexitarian diet.

So the chances are the flexitarian diet will offer us an option that costs us less, has a lower environmental impact and a better overall nutritional quality than the diet most of us eat now.

“It’s indeed possible to eat a sustainable, nutritious diet that contributes to the future health of the planet and its population, without significant increases in costs.” – WWF (UK), 20174